A statement of conflict of interest: the last authors, Yasser Riazalhosseini and Özgür Sahin, are my long-year collaborators. I am not involved in the study any way though.

What is lysyl oxidase (LOX)

Lysyl oxidase (reviewed here) is an enzyme of the class amine oxidase. It converts lysine into highly reactive aldehydes that form cross-links in the extracellular matrix. It is induced by hypoxia-induced factors, and its expression is reported higher in several cancer types. Its inhibition has been suggested to abolish metastasis. The Wikipedia page of the gene summarizes some of the findings.

Saatci et al. used a xenograft mouse model of a human cancer cell line (MDA-MB-231) to identify differentially expressed genes between cells that are sensitive to doxorubicin, a chemotherapy agent, and cells that resistant. They compared differential gene expression profiles derived from their experiment with publicly available data of patients and found good concordance. From the data, they observed that FN1 and ITGA5, which form a ligand-receptor pair in integrin signalling, are positively regulated.

It is believed that hypoxia-induced factors (HIFs) regulate integrin and focal adhesion. They asked whether HIF induction is involved in the process. By verifying the positive regulation of CA9, a known marker of HIF induction, they accepted the hypothesis. Among genes modulated, they identified LOX as particularly interesting because of its functions and its association with metastasis that we introduced before.

Next, they confirmed the regulation of LOX in this system by HIF1A. They mined patient data to show that increased LOX expression is associated with shorter relapse-free survival in chemotherapy-treated basal breast cancer patients but not in other patients.

They went on to show that inhibition of LOX by beta-aminopropionitrile, BAPN remodels extracellular matrix (ECM) to confer sensitivity to chemotherapy. Targeting LOX or its downstream signalling components FAK/Src reduced drug resistance in vivo.

Since the microRNA is inhibited by HIF1A, HIF1A, miR-142-3p and LOX form a feed-forward loop with consistent net outcomes: HIF1A induces LOX, at the same time it inhibits miR-142-3p, which in turn inhibits LOX. Therefore, miR-142-3p may mediate sustained induction of LOX upon HIF1A induction.

Mechanistic understanding of how LOX may mediate drug-resistance

Our mechanistic understanding of how LOX may mediate drug resistance in triple-negative breast cancer is captured in Figure 8 of the paper. 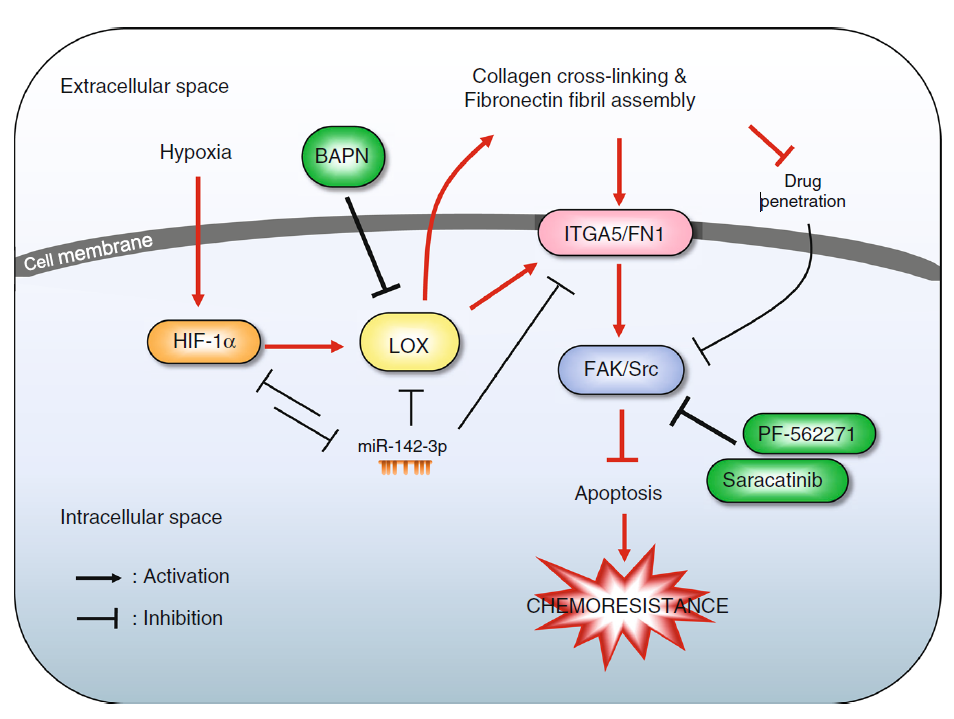 Conclusions and my impressions

I learned a lot from reading the paper, especially integrin and focal adhesion signalling and its regulation by hypoxia, and regulation of extracellular matrix modelling by LOX.

From the drug-discovery perspective, BAPN is not specific and potent enough. It seems that it is more active against LOX-like genes including LOXL2 and LOXL3 than LOX itself (source: ChEMBL). And it exposes considerable cytotoxicity. A better chemical tool is needed to further validate the biological role and the potential of LOX as a drug target.