The authors determine to better understand this process from the perspective of gene expression profiles of each macrophage cell. To this purpose, they isolated CD45+ haematopoietic cells, the cells that responsible for the formation of blood cellular components (haema=blood in Greek, poiesis=to make), from human embryos. Next, they used single-cell RNA sequencing to characterize them. In particular, they performed single-cell culture of a subset of cells, known as yolk sac-derived myeloid-biased progenitors that express surface markers CD45, CD34, and CD44.

Such myeloid progenitors develop later into myeloid cells, including megakaryocytes, erythrocytes, mast cells, and myeloblast including into basophil, neutrophil, eosinophils, and monocytes, which mature into macrophages. The alternative route to myeloid cell differentiation is to differentiate into lymphoid cells including natural killer cells, T cells, and B cells. Together they constitute the innate and adaptive immune system. The following figure by A. Rad and Mikael Häggström, M.D., used under the GNU Free Documentation License, provides a high-level overview of this process. 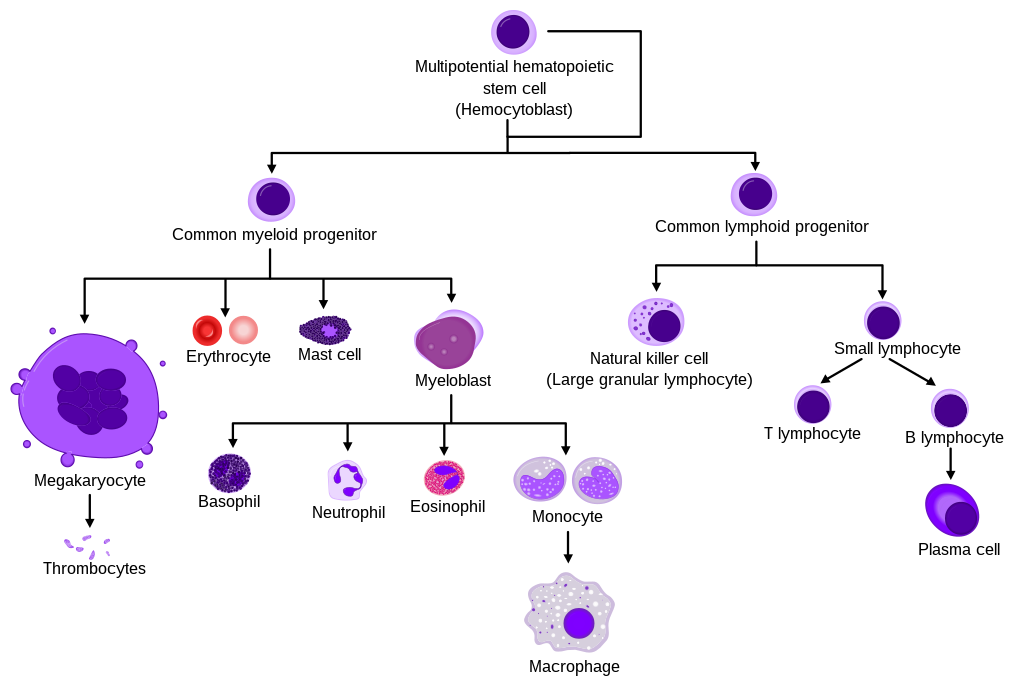 They investigated macrophage heterogeneity across multiple anatomical sites and identified different types of tissue residential macrophages in the central nervous system, liver, lung, and skin. Furthermore, they analysed the specification trajectories of resident macrophages. Finally, they compared embryonic resident macrophages and their adult counterparts (the data of which were collected from published studies).

The dataset can be interesting for macrophage researchers, in particular researchers of tissue-resident macrophages such as microglia, a special type of macrophages in the brain. And it can be a good reference dataset to benchmark macrophages derived from induced pluripotent stem cells.

Human cells contain two copies of each chromosome, one from the father and the other from the mother. Genes, which reside on chromosomes, have therefore two copies usually (barring from those genes encoded by sex chromosomes X and Y in males). The copies are also called alleles. If out of any reason one allele is lost, it is called loss of heterozygosity, often abbreviated as LOH. It is, for instance, often observed in cancer.

To verify the hypothesis, they shovel through many datasets and identify more than 5000 variants in 1278 essential genes that undergo LOH in cancer, and evaluated the potential for each to be targeted using allele-specific gene-editing, short interference RNA, or small molecules. They showed that mono-allelic inactivation of two essential genes, PRIM1 (DNA primase small subunit 1, GeneID 5557) and EXOSC8 (exosome component 8, GeneID 11340), selectively inhibited cancer cell growth.

While the results remain to be validated in vivo and the toxicity profiles of such treatments need to be characterized, the idea is an interesting one, and it may inspire further research in this direction.

For those who are interested in how they came to the variants, here is a short summary. They mined the Exome Aggregation Consortium (ExAC) database, filtered to include only common variants in genes for which copy number calls were available through the NCBI Genomic Data Commons. They found 228,440 potential targetable variants.

The essential gene list was derived from three genome-wide loss-of-function screens of haploid human cell lines. It was filtered using CCLE gene copy-number and RNA expression data to keep only reasonably expressed genes. Other filters such as tumour suppressor genes were also used.

Nucleosome positioning and its prediction

Last weeks I read a few interesting papers and reviews about the regulation expression of gene expression by nucleosomes and transcription factors. In a blog post, I share my learning note about nucleosome positioning and its prediction.

OSRA (Optical Structure Recognition Application) is a software that recognizes graphical presentations of chemical structures, such as those in PDF and image files, into computer-readable formats such as SMILEs and SD files. It is developed at the National Cancer Institute of U.S. The link at NCI points the latest version of v1.4.0 as of May 2020. A major re-write, OSRA II, is available at SourceForge.

I gave it a try and it seems to work well with an example that I found.

Similar with working with any other prediction tools, the results should be taken with a grain of salt, the interpretation should only be done with caution, and ideally, a human expert should be involved to help with the interpretation. The tool is nevertheless useful for anyone who works with drug-like molecules to get a first, rough idea of drug-related physicochemical properties of his or her favourite molecule.

Another web-based tool for similar purposes is MolInspiration. It was used in the Medicinal Chemistry online course at EdX that I took. The course was given by Erland Stevens, an outstanding teacher, and is offered by Davidson’s College and Novartis.

I have an application that I need to build locally and share and run remotely. For this purpose, one can use Docker, which essentially runs a program in an encapsulated environment to keep it isolated from the host and from other containers.

To achieve this, each container interacts with its private file system. This file system is provided by a Docker image. In another word, an image includes everything an application needs: the script or the binary code, dependencies, and data files.

Though it is perfectly fine to use Docker daemon as explained in the Docker tutorial, some issues make people concerned about using the Docker daemon. A solution to these issues is to use Podman. The reasons why using Podman makes sense is explained by William Henry in a blog of RedHat Developers.

For laymen like me, it suffices to know that Podman can do the job of a Docker daemon. Images of Podman and Docker are compatible. And the commands of Podman are identical with those of Docker. That means we can set up a Docker image and run it on Podman.

Center aligned figure and figure caption with kramdown in Jekyll

Thanks to a blog post and a StackOverflow answer, I implemented a simple solution to align figures and figure captions horizontally in the centre.

Other tricks that I learned

Rule-based models in R with Cubist and RuleFit

Max Kuhn posted a blog post on modern rule-based models on R Views. He introduced the R packages dplyr and rpart, and highlighted the C5.0 rules, the Cubist method, and the RuleFit method.

The Cubist method is an ensemble method works like boosting, using multiple models that are built sequentially to make predictions. And it uses nearest-neighbour adjustment following model predictions, using similar data in the training set to update prediction results.

I like the style of writing, which is clear, compact, and application-oriented. The authors introduced drug development including discovery, clinical trials, and chemistry, manufacturing, and control (CMC). They guided readers through the Bayes’s theorem, prior setting, and different sampling methods such as rejection sampling, Gibbs sampling, and Metropolis-Hastings sampling. Using binomial distribution and normal distribution as examples, they showed readers how the algorithms work in principle, and importantly, how day-by-day analysis is done with commonly used open-source software for Bayesian analysis, including WinBUGS/OpenBUGS, JAGS, and Stan. In the third and the last chapter of the Background section of the book, they explained an important application of Bayesian statistics in drug discovery and development, namely estimating minimal sample size of a clinical trial and calculating the statistical power of such a trial.

The rest of the book deals with case studies of Bayesian statistics in preclinical and clinical research (section II), and applications in CMC (section III). I have not dived into the details yet. But skimming through the chapters left me the impression that the authors have done a good job in capturing the many aspects of applied Bayesian statistics into self-containing short stories, which help the readers grasp the essence and advantage of Bayesian approaches quickly.

I recommend the book to researchers who are new to Bayesian statistics and who want to apply it in drug discovery and development.

In layer 2, the package provides tools for model building, including joint distributions and probabilistic layers (tfp.layers) that extends Tensorflow layers, providing uncertainty over the functions they present.

The project is under active development, and the interfaces may not be stable. However, it provides a toolkit to view probabilistic reasoning and statistical inference from a machine-learning and computer-science perspective.